I'm not sure why I'm so over the moon excited about this possibility, but I really think a darker, more adult version of Snow White could be genius, and I'd love to see KStew in that role. Viggo Mortensen is on to play the Woodsman and we hear Charlize Theron is an option to play the evil Queen.

Other actresses being considered are a commendable group and those girls have already been through a series of screen tests. The top contenders listed are Riley Keough, Felicity Jones and Alicia Vikander. Emily Browning tested this past weekend. Kristen is at a point now where she no longer needs to screen for roles-- she is instead courted by Universal instead of needing to vie for the role.

Interesting that Emily Browning was the original name listed for Bella Swan. Stephenie Meyer herself saw Emily as playing our Ms Swan, so to imagine Kristen stealing another role from Emily is quite ironic.You'll recognize Riley Keough as the granddaughter to Elvis Presley. Riley was in The Runaways with Kristen Stewart and Dakota Fanning.

Kaleb Nation did a rendering on Photoshop to give us an estimation of what she might look like. Beautiful no? 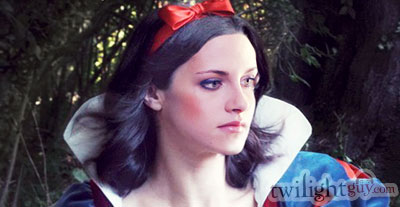 I'm sure most of you have seen this, but the first picture released from Summit is a doozy. We get a shot of Edward and Bella.. in bed..in their first night as a married couple. 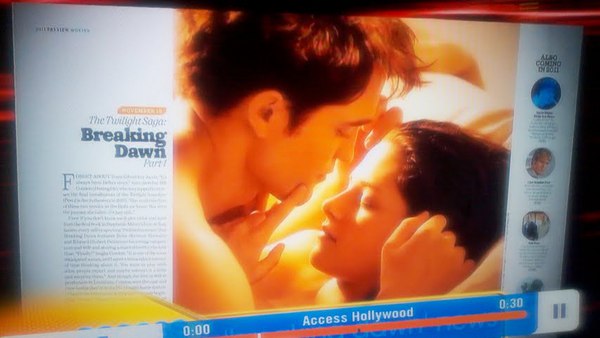 It previewed today on Entertainment Weekly:


Bill Condon explains his choice of this photo


Entertainment Weekly has an exclusive first look at The Twilight Saga: Breaking Dawn Part 1. The shot, which is only available in Entertainment Weekly's print edition, features Bella (Kristen Stewart) and Edward (Robert Pattinson) as husband and wife…on their wedding night. “It’s one of the most anticipated scenes,” Breaking Dawn director Bill Condon tells EW. “I spent a tremendous amount of time thinking about it. The anticipation is part of it and you want to play with what people expect and maybe subvert it a little and surprise them.”For more information about Breaking Dawn (in theaters Nov. 18), check out this week’s issue of Entertainment Weekly.

I know we've discussed Twilight topping baby naming lists, but it seems to be taking over pet names as well. I find that to be pretty obvious given that a large number of characters are animals, specifically shape-shifting into wolves. It's not that big of a stretch to name your pet dog after a wolf-life character.

This is our Leah. We figured a Husky was pretty darn close to a wolf 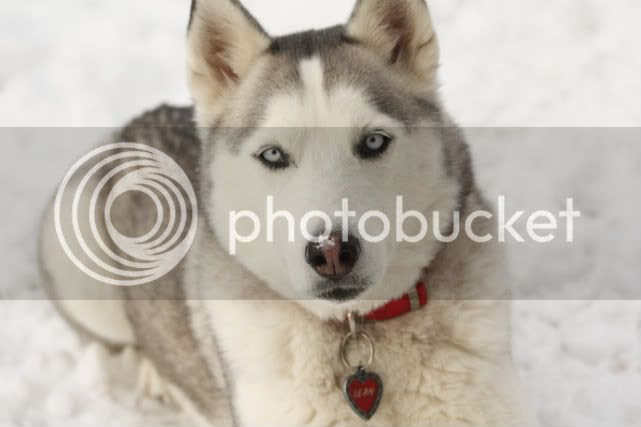 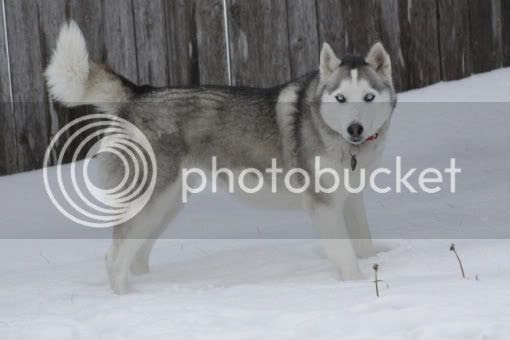 So not only is Twilight Saga: New Moon airing on Showtime, it's also for free this entire weekend! If you don't have Showtime in your regular listings, no fear! Showtime is having free preview weekend, and New Moon is in that list. So, ya know, if ya have DVR capability, you can record New Moon and keep it Foreveh and Forevah in your DVR list. Not that I keep my original recording of Twilight from the very first time it ever aired on TV on my DVR list or anything. 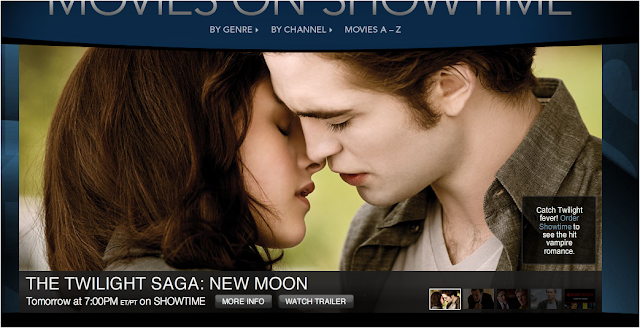 A recent interview with Wyck, producer on the Twilight Saga, confirms some info most of us already know, but I'll still tell you that it's spoiler-ish if you are attempting to stay away from any information. The interview does give us some great tidbits since we are all holding our breath in anticipation for the first picture/spoilervideo/trailer/clip/award show awkwardness introducing the newest clip that we'll see this year.

Interview below, SO HERE GOES THE OBLIGATORY SPOILER CAPTION

What does the future hold for Bella and Edward in 'Breaking Dawn'? 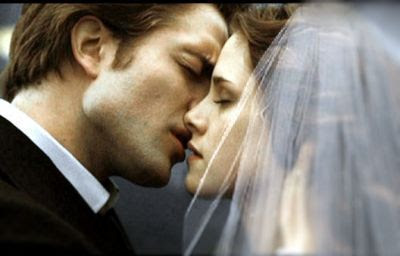 The most horrifying pregnancy since Rosemary delivered her devil child.

The threat of a vampire massacre on a nuclear scale.

The wrap-up to the film franchise that began in 2008 and has grossed nearly $1.8 billion worldwide is truly the event-filled mother-of-all Twilight tales, based on the massive fourth volume of Stephenie Meyer's literary phenom.


Even the most rabid Twi-hards have been nervous about how the sometimes graphic 754-page tome would translate on screen as the mixed-marriage spawn of courtly bloodsucker Edward Cullen and beloved human Bella (played by Robert Pattinson and Kristen Stewart) leads to friction with the Volturi, who act as vampire royalty, and the werewolf-prone Quileute tribe.

Speaking from the Baton Rouge set where both installments of Breaking Dawn are shooting simultaneously, Wyck answered some of the Twi-faithful's more pressing questions.


Q: Where does the story split in half?

A: "We basically want to take the audience through the emotional part of Bella's journey as she becomes a vampire. The first part will cover the wedding, the honeymoon and the birth." The film ends just before she embarks on her supernatural transformation.

Q: The book has three segments, two of which present Bella's point of view and a middle that's devoted to the perspective of her rejected werewolf suitor, Jacob (Taylor Lautner). How is that handled?

A: "The story will break from her and follow Jacob throughout the course of the movie as he struggles with his own dilemma. There is a sense that as Bella and the Cullens (Edward's makeshift vampire clan) deal with her pregnancy, the world is still turning outside with Jacob."


Q: Why was Bill Condon, the Oscar-winning filmmaker best known for his musicals as the screenwriter of 2002's Chicagoand the director of 2006's Dreamgirls, selected as the director of the finale?

A: "These films have the most difficult stuff from a performance standpoint. With his history of directing, I can't think of anyone who would be better at bringing out the best in an actor." Plus, the director, who did the 1995 sequel to Candyman, is a fright-fare enthusiast. "He has an appetite for the genre and a passion for the Twilight books and movies."


Q: Considering what goes on during the torturous birth process, how can the rating be PG-13?

A: With Twilight's core of under-18 fans, "it would be a crime against our audience to go R-rated." However, "this is based on a much more mature book. We need to progress and be more sophisticated."

A compromise: Having the bloody, bone-crushing delivery be seen only through Bella's eyes. "She is looking through the haze, experiencing pain and everything rushing around her. We only see what she sees."


Q: How is the long-awaited consummation of Edward and Bella's love portrayed?


Q: At the end of Breaking Dawn, about 70 or so vampires from around the world gather to face off with the Cullens and their allies plus Jacob's wolf pack. How can you keep both portions of the storytelling equally compelling?

A: "The second half is more of an action film in terms of life-and-death stakes." But the domestic moments of the first film possess an emotional punch. "There are the pangs of newlywed tension that occur that are relatable even in a fantasy film. Marriage is not quite the experience that they thought it was."


Q: Is there any chance that Condon could sneak in a musical number?

A: There might be traditional dancing at the wedding. But don't expect any of the wolf pack to suddenly howl a tune or do a soft-shoe shuffle.
Although, as Godfrey jokes, "We just had a whole line of actors marching toward the camera. We could have them practice a chorus line with vampires doing kicks."

I know this is old news by now (it's been out for at least 3 days) but I really love the fact that Rob was unsure about committing to the role of Jacob in "Water for Elephants" until he met Tai, the elephant he'd be filming next to for months.

For Robert Pattinson, it was the elephant that sealed the deal.

The Twilight star, 24, was on the fence about taking the role of Jacob, a veterinary student who joins a traveling circus in the upcoming Depression-era romantic drama Water for Elephants – until the actor met Tai, his 42-year-old, nearly 9000-lb. costar.

"Rob was non-committal until he saw the elephant," recalls the film's animal coordinator Paul 'Sled' Reynolds. "After he met Tai, he knew he wanted to do this movie. He absolutely adored that elephant." 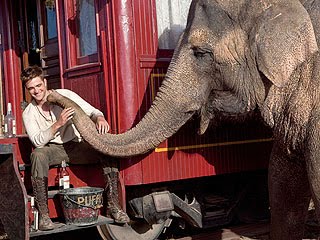 The adaptation of Sara Gruen's bestselling novel, which arrives in theaters on April 22, tells the story of a love triangle that develops between Jacob, Reese Witherspoon's Marlena, who is the show's bottle-blonde star performer, and her husband August, the circus's abusive ringleader, played by Oscar-winning Inglourious Basterds star Christoph Waltz.

Chemistry Lesson
While it was important to the filmmakers that Pattinson bond with Tai, their chief concern was making sure sparks flew between him and Witherspoon, 34.

"I saw early on that those two had a real on-screen chemistry," the film's director Francis Lawrence (I Am Legend) tells PEOPLE. "There was just this thing that happens between the two of them when they are together as those two characters that was very exciting."

A Sensitive Guy
Lawrence became convinced that Pattinson could pull off the challenging role of Jacob shortly after a meeting with the British heartthrob to discuss the part.

"When I sat down with Rob, I found that despite his success, there was a real sense of humility with him," says Lawrence. "I found that he was kind of uncomfortable in his own skin, and maybe even uncomfortable with everything that was happening to him. Rob is a very sensitive guy who very much loves animals."

Adds Lawrence, "I found that, wow, this guy kind of already is Jacob."

Carter Burwell, composer on Twilight, MIGHT return to Breaking Dawn!

I don't know about the rest of you, but the score on Twilight seemed to surpass New Moon and Eclipse. So the idea that Carter Burwell, the composer on Twilight, might return to Breaking Dawn is super exciting. Indiewire is the only one so far to report this, so we can't truly confirm it until we hear more from Summit, but they do make a convincing argument.


Coen Brothers and Spike Jonze regular collaborator Carter Burwell is set to return to the ‘Twilight’ since working on the first film to perform scoring duties for the final installment of the series, the two parter “Twilight: Breaking Dawn.”

Burwell has an existing relationship with the director of the final two parts, Bill Condon, having collaborated on “Kinsey” and “Gods And Monsters” and will return to the position after Alexandre Desplat followed him for “New Moon” with Howard Shore stepping in for “Eclipse.” Shooting began this past November with all major cast members such as Kristen Stewart, Robert Pattinson, Taylor Lautner, Dakota Fanning, Michael Sheen, Anna Kendrick and Ashley Greene reprising their roles. The two parts will be shot as one project and will then be respectively released on November 18th, 2011 and November 16th, 2012. And in case you haven’t do so already, check out Burwell’s score for “True Grit,” it’s ace.