HillyWood has released this picture of their upcoming New Moon Parody, due out in just a few days 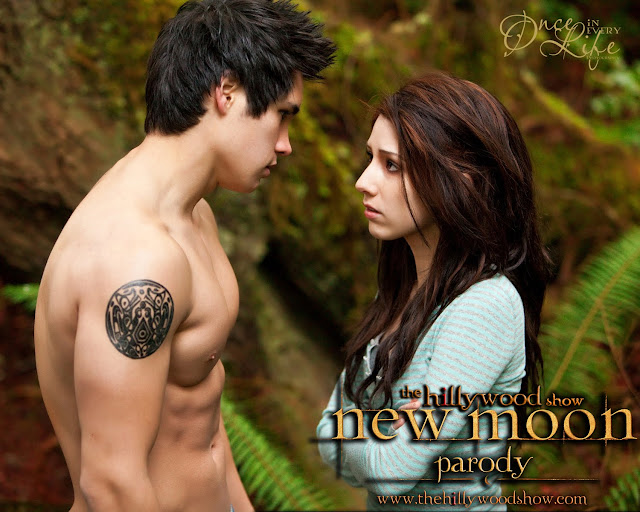 FIRST INSIDE LOOK INTO NEW MOON PARODY BY THE HILLYWOOD SHOW™
December 30th, 2009 at 7:17 pm | Posted by The Hillywood Show
Here’s something to help the wait for The Hillywood Show’s™ ‘New Moon’ Parody a little less harder!

Now, you’ve got the first picture of two principal actors from the parody, Hilly Hindi & Kyle Dayton courtesy of Once in Every Life Photography.  Look for the premier of The Hillywood Show’s™ ‘New Moon’ Parody on the internet only a few days after New Years!  It will be here before you know it!

Dish out your comments and keep checking back on www.TheHillywoodShow.com during the week for even more ‘New Moon’ Parody goodies!

Twilight becomes one of the most searched topics in 2009

As we close out 2009 today, Yahoo and millions of other search engines and news outlets are putting out their year in review articles, and we all know Twilight is sure to be on many lists. Last night on VHI, 2009 Year in Review, Twilight made the list as being one of the biggest phenoms of the year, as well as bringing back the sexiness of vampires

Yahoo today posted that Twilight was the #2 most searched topic in 2009, right behind Michael Jackson.

With every "Twilight" book, DVD, and soundtrack release, and every cast appearance at malls across America, mass swooning from "Twilighters" erupted online.
The brainchild of a Mormon housewife, the series centers on high schooler Bella Swan, whose romance with vampire Edward unfolds over four books, each patterned after a literary classic ("Pride and Prejudice," "Wuthering Heights," "Romeo and Juliet," "A Midsummer Night's Dream").
Relative unknowns Robert Pattinson and Kristen Stewart broke out big as the 2008 film leads. This year's record-making sequel "New Moon" introduced new blood: Buffed-up Taylor Lautner as a teen werewolf vying for Bella's affections and dividing (most female) fans into opposing camps supporting Team Edward or Team Jacob. —VC

Of course we also topped out as the #4 highest grossing movie of the year
Written by L at 10:09 AM No comments:

100 Monkeys and Jackson Rathbone in Dallas 2010

As of yet, there are already 2 dates for 100 Monkeys concerts in Dallas for 2010-- this will matter little to many of you who are not in Dallas, but for my local ladies, here is the information
Next week, Jan 5th 2010, 100 Monkeys will be at the Loft. Ticketmaster has tickets for $16.
However, the 100 Monkeys Site lists tickets at $13 in advance, $15 at the door, so you might want to call


They'll also be in the Austin, Houston, McAllen, San Antonio and Tulsa area's if you want to catch them there in the next few weeks for their Post Christmas Tour

So cute! I'm an obvious Jasper fan, but even bigger Jackson fan so it's awesome to see Papa MJRV and Mama Rathbone talking about Jackson's rise to fame

100 Things I learned from New Moon

So I've been incredibly BUSY these last few weeks and have posted nothing of Twi-worthiness for you readers. To make up for it, I'll repost 100 things learned from New Moon
100 Things

Here are a few that make me giggle

#15 A guy who looks like he got in a fight with body glitter definitely screams DANGER TO YOUR HEALTH. ~ MaRona


#16 Werewolves are absolutely forbidden to tell humans about their existence. They are, however, allowed to HINT that they're werewolves in a manner that's not unlike a guessing game. ~ Adam


#42 Just because she'll die for you doesn't mean she'll marry you. ~ WatcherAngel


$79 The hardest decision a teenage girl can make is whether she wants to date the guy who wants to kill her or the one that drinks out of the toilet. ~ wolfgirl92

I have to admit this is hella cute from Hot Topic 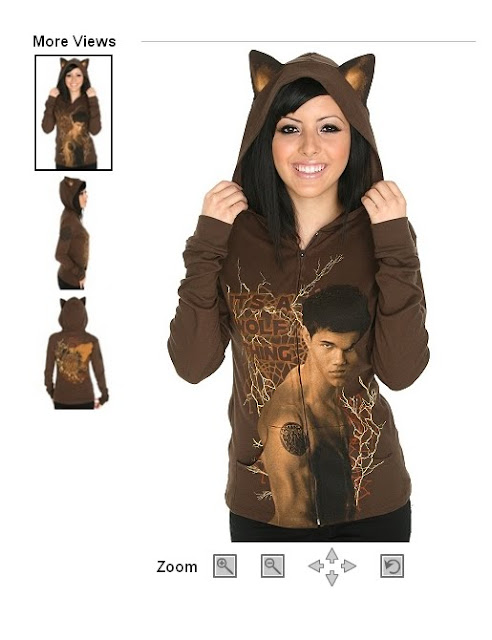 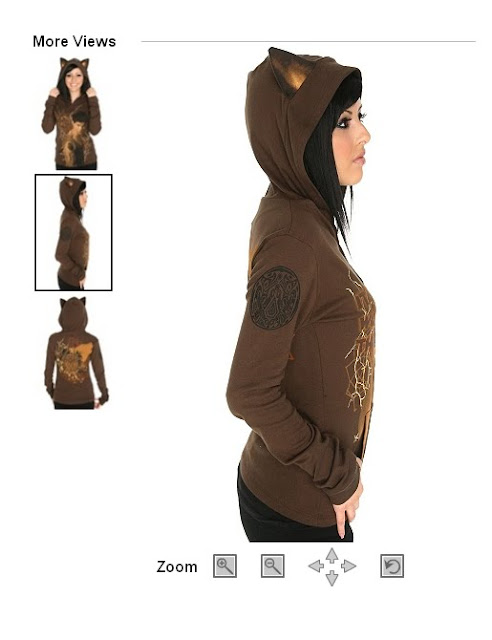 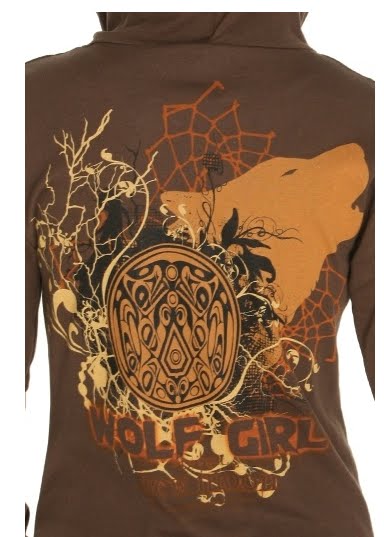 Wolf Ears AND a Wolf Girl quote? Almost makes me want to jump teams. Yeah, no it didn't, but it's still cute
Written by L at 10:34 PM 16 comments:

Who knew Taylor was Team Edward

You know why I can't work with her.  But you know, if those abs were real, that guy deserves an Oscar

REALLY not sure this is Oscar worthy. REALLY unsure after hearing the accent. My love for Kristen has been obvious and documented in the past few weeks, but unlike Bella's line in New Moon (yes the book), love did not make me irrational in this case. I think it will probably be done well but I don't see the Oscar. Looks like Jessica Stanley will score a Oscar before Ms. Bella

Parodies are stepping out on the town in force as they scramble to make the biggest viral hit post New Moon premiere. I can't listen to the Black Eyed Peas the same, ever again

Nikke Finke confirms that Taylor has awesomely won the starring role in the upcoming movie Max Steel, an action movie based on a Mattel Character. These movies have been a pretty popular commodity lately (next to Twilight of course), so this movie (series???) has huge potential to skyrocket Taylor from WolfBoy to Leading Man. Looks like a lot of trust for a movie company to base around a 17 year old young man. They MUST be banking on his already built in fanbase with fangirls. Will we see a crossover hit between fangirls and fanboys? Will there be marriages, in which fanboys actually get girlfriends, take showers, stop playing video games and discover the wide world of dating? WILL THIS CHANGE GEEKDOM FOREVER? Let's hope so, cause those fanboys could use a shower.

Paramount has confirmed to me exclusively that it’s hired 8-pack-abs Taylor Lautner for the lead in Max Steel, instantly creating perhaps the next young big action star.
This is the Joe Roth-produced project based on the hugely successful Mattel property that’s an international bestseller. The movie will receive a major push planned as Mattel raises its stateside presence with the Paramount release. I’m told Max Steel will be a four-quadrant popcorn movie in the spirit of Iron Man about a 19-year-old extreme sports junkie recruited by a secret agency after an accident infects his body, leaving him with superhuman powers. 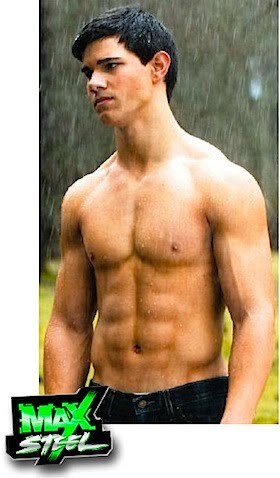 I'm guessing the Abs of Steel didn't hurt Taylor's chances with winning this role either, but I"m hoping his acting skills in New Moon wowed some naysayers out there as well

Editors note-- I am a Star Wars superfan although not as much as Twilight. I say and speak of fanboys because I know them and I love them. This is not a Twihard vs Trekkie smackdown. It's a love hug between all of fan nerds out there, regardless of gender. Just have to poke fun sometimes. It will all be ok
Written by L at 6:25 AM No comments:

Peter COULD be baking cookies, but he just stands around instead.

Peter and Jennie talk Christmas, and Peter's lack of participation in cookie making as he apparently just stands around while the family whips up Christmas.  Here.   So Freaking Cute. I love her snark 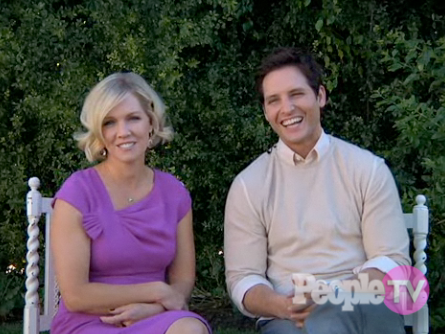 Well now this just makes me want to laugh so hard I could cry. If you've read New Moon in 15 Mins by Cleolinda, you'll remember clearly Mr Beaty asking Mr Cullen to speak up-- you know fangirls will be downloading Edward reciting Romeo and Juliet to use as ringtones.


More here at Twifans for New Moon Ringtones
Written by L at 3:06 PM No comments:

Yeah, you have to see this. You just have to. Take the next 5 mins of your life, hit pause on the Tivo, put down your cell phone and just watch this Twilight Rap. For nothing else, other than everyone else will be talking about how if Edward really loved Bella in New Moon "he woulda put his fangs in it", and you know you wanna see two guys who are about to get the phone numbers of 200 females at once, setting a new record for ability to pick up large quantities of women by utilizing awareness of Twilight

Whoooooottt!! Been waiting on this one for awhile (ok only 2 weeks). If you haven't read Twilight in 15 mins, you must stop reading NOW, and go read it.  It seriously shaped my viewing of the movie, and I can't ever make it to the end without some strong guffaws. Seriously loud, turn the TV on mute type laughs as I read to TheWolfMan... oh Tylers Van of Death gets me every time. To pass the time for the rest of you who have read it, I'll recap some of Cleolinda's funnier moments, including bringing us the word "fursplosion", The "Hot Topic MAUL Tour", playing the fun game "Horrifying the Twilight Noob", and best of all... the linking of Growing Up Cullen. You must read this as well. I"m not kidding when I say, of all the fanfics and commentaries, these two are the ones I quote the absoloute most. Growing Up Cullen makes me laugh so hard I pee myself. It has tons of language. TONS of it. Get over it.

So Cleolinda FINALLY posted New Moon in 15 Mins. Thank Edward. And Jacob. And hot James that died sadly. So without further ado, here it is. READ IT
Written by L at 8:13 PM 4 comments: